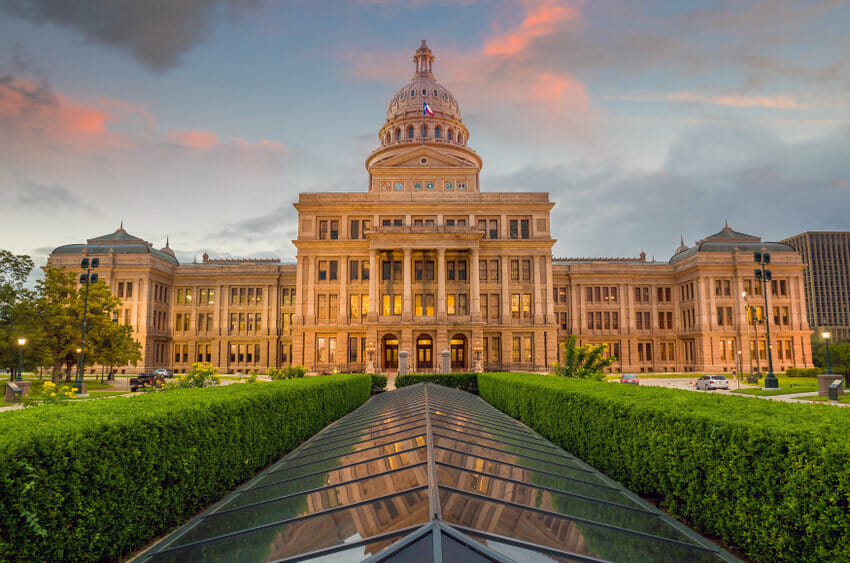 For those unfamiliar with the bail bonds reforms happening in Texas, Senate Bill 6 eliminates the possibility of PR (Personal Recognizance) bonds for individuals who have been accused of violent crimes. Those defendants will be required to post regular cash bonds or use a bail bonds company if they can’t afford the cash bond. The new bill goes into effect this year (2021).

Defendants are legally presumed innocent even if indisputable evidence (i.e., video or verbal admission) is available before trial. What Senate Bill 6 changes is how or even if a person can be released from jail while awaiting their criminal case (or cases) to be resolved.

Gov. Greg Abbott signed SB6 into law that requires defendants accused of violent crimes to pay cash to get out of Texas jails. They also have the ability to pay a fraction of the bail bond amount by using a bail bonds company if they do not have the cash available.

The Texas House of Representatives pass Senate Bill 6 on August 30, then the State’s Senate approved amendments to the bail bond related bill on August 31. Governor Greg Abbott had previously declared changes to the Texas bail bonds system an emergency at the start of the state’s regular legislative session that began in January.

During the Safer Houston summit Abbott spoke about the bail bonds bill and said it would be a top priority. The bill, dubbed “The Damon Allen Act” is designed to prevent dangerous criminals from being released from jail. Officer Damon Allen was killed in 2017 during a traffic stop. The defendant was out of jail on a bond after allegedly assaulting a Sheriff’s deputy.

How Are Defendant’s Released From Jail Now?

Currently, most defendants in Texas jails are released using bonds, either PR bonds, cash bonds or surety (bail) bonds. If a defendant is issued a non-PR bond and doesn’t have the financial resources to post the entire amount, they have the option of using a bail bondsman where instead of paying the full amount, they pay a much smaller percentage. Often that percentage is between 7 & 8 percent of the total amount of the bond. And even a portion of those amounts are often placed on payment plans.

Harris County, in particular, has been forced to release more defendants on PR bonds. These PR bonds don’t require any cash. However, they do sometimes have requirements like drug and alcohol testing. PR bonds are basically a pinky swear by the defendant that they will attend all required court dates and abide by all requests to perform drug and alcohol screening when required. Of course, the problem with PR bonds is that nobody is monitoring the defendant other than the occasional drug screening request.

The Problem With PR Bail Bonds

PR bonds often give defendants the illusion that their charges are not important and if they don’t show up for court, it’s no big deal. Unfortunately, PR bonds have also given the illusion that getting out of jail is easy – sort of a “revolving door” type scenario. Some law enforcement officers have said defendants have made statements such as “ha, I’ll be back home before you finish your shift!” while sitting in the back seat of squad cars.

Another problem with PR bonds is that the defendant has no sense of “village” or “community”. In other words, there’s nobody else around the defendant with skin in the game to help keep the defendant on tract. No friends or family members are directly connected to the defendant related to ensuring they do their weekly check-ins, show up for drug screening or show up for court when required. Basically, the defendant is on an “island” as far as support is concerned.
SB 6 bans the use of Personal Recognizance bonds for people accused of violent crimes. Instead, they will be required to post either cash in the amount set by the court, or pay the required percentage to a bail bonds company. SB6 also bans cashless release for those arrested on any felony charges if they were already out of jail on bond in a violent criminal case.

The bill also requires the creation of a new system for court officials to have access to the criminal history of defendants before setting bail. This will assist judges and magistrates in having a more detailed view into the defendant’s prior criminal history.

Some Democrats and other Civil Rights activists feel the bill’s exclusion of cashless bonds, but not money bail, will create a wealth-based detention/release system that leads to overcrowed jails. They also stated requiring cash to get out of jail will primarily penalize low-income people, and feel it will limit judicial power and be a boost to the for-profit bail bonds industry.

On the other hand, proponents of the bill say the bill couldn’t be any fairer. Bail bonds would be set based on the person’s charges along with their prior criminal history.

Laquita Garcia with the Texas Organizing Project stated “SB 6 is built on right-wing hysteria that violates Texans’ rights, not on public safety. If implemented, this bill will lead to more overcrowding in jails and further criminalize poverty in our state, meaning more Texans — a disproportionate amount being Black and Latino — will stay stuck in jail solely because they cannot afford bail.” Conversely, proponents of the bill feel people need to take responsibility for their actions, criminal or otherwise. And anybody that participates in criminal activity, wealthy or poor, shouldn’t complain about the cost of that activity. Many proponents of the bill have commented that they feel opponents aren’t ready to have the hard conversation related to people taking responsibility for participating in the activities that lead to their arrest.

Lawmakers, crime victims and their supporters insist the legislation is required in order to keep dangerous people behind bars while their cases are being resolved. Additionally, many supporters of the bill point out the rising rates of violent crimes and the many examples of defendants accused of violent crimes being released on PR bonds and then accused of new crimes.

The murder case of Caitlynne Guajardo is just one such example where her estranged husband allegedly murdered her shortly after being released on a PR bond where he had previously been arrested on a charge of assaulting Guajardo.

“I mean, it’s the answer to our prayers,” said Melanie Infinger who has been fighting for the legislation since her daughter Caitlynne Guajardo was killed in 2019.

“Bail reform is extremely important to me, because it ultimately cost my daughter her life, my daughter and my unborn grandchild who she was pregnant with at the time,” Infinger said.

Once Senate Bill 6 is fully implemented, it will affect Dallas bail bonds as well as bail bonds all over the state of Texas. All cities and counties will be required to adhere to the provisions of the bill, including Dallas and Tarrant counties.

Southern Bail Bonds Dallas makes a point of staying abreast of any news or events that affect the Dallas Bail Bonds industry. We are dedicated to providing the best service possible and are happy to answer any of your bail bonds questions.

If you need to post bail for a friend or loved one, please contact our office now at 214-372-2500! We can help you get the answer you need and help get your bonds posted quickly.